The Caligastia 100 Meet Their 100 Human Associates

Switch to full style
A forum for reviews and discussion of current events, TV, books & movies from a UB or spiritual perspective that relates to The Urantia Book.
Post a reply
rick warren

The Caligastia 100 Meet Their 100 Human Associates

Can you imagine that first meeting of humans and celestials 550,000 years ago, between the Caligastia 100 and their 100 human associates who had been selected and led to the future site of Dalamatia? This is how I envisioned it, from Van's point of view, in a Urantia-based novel, The Planetary Prince & Van the Steadfast:

When a lookout for our aides-to-be saw us hiking up the forest path toward their camp, she ran to alert the others. These one hundred life plasm contributors had been brought together by Earth’s resident angels in collaboration with the Life Carriers and inner spiritual guidance. The narrative about how they were drawn to the future site of Dalamatia is too complex for this record. I will say that each one had difficulty detaching from lives and families to heed a mysterious call from within, having no tangible evidence to validate or justify this innermost urge. Even so, these unsung heroes overcame doubt, the trauma of separation, and the fear of traveling afar and proceeded to wend their way to this site. With the help of inner guides and their angels all one hundred, fifty men and fifty women, circumvented every danger from humans, beasts, climate, and arrived safely.

The inner influence I speak of resided in all one hundred. This presence of God indwells normal minded humans as a spiritualizer of thinking and a guide to the divine will. These internal guides do not command their hosts as much as they lead them by inner knowing. Humans of the twenty-first century also enjoy this ministry. And such was the case with these one hundred humans and their near simultaneous arrival at the future site of Dalamatia. Despite the fact that they themselves did not understand precisely what drew them, or for what purpose, these intrepid humans heeded this inner call, departed on a dangerous trek to a strange location where we could meet them in bodies like theirs. Indeed, our corporeal forms were fashioned from replication of samples extracted from their tissues. So skillful were the celestial surgeons that the donors were unaware of their crucial contributions.

Upon arriving, each one was amazed to find ninety-nine others similarly attracted to the future site of Dalamatia. All but a few hailed from different regions and knew not the others. Most spoke similar tongues, and they sensed a certain spiritual kinship that held them together until this meeting with our group. There we were, on the brink of making first contact between that group of ascending mortals and my group of descending immortals, both sons and daughters of a mutual creator.

After we were seen, we stopped to await the appearance of one or more representatives coming out to greet, or perhaps, try to scare us away. It was an uncertain moment.

About half of them soon appeared, at first taking positions behind trees to observe and discern our intentions. A stout youthful man, one of the few not concealing himself, moved forward. He eyed us cautiously for a long moment.

I was the first to speak. But I was not certain I would be understood, only having learned a few dialects on Jerusem, and having never tested them on an actual native speaker. I said slowly and as clearly as I could in three of the dialects: “The Prince of the Earth comes to meet his beloved children. Do you speak for them?”

All were now looking to this lone man for a response. There was hesitation and silence. It was tense for a moment, until I smiled. Suddenly, all apprehension drained from his face, and he acted as if he were expecting us. He said in clear voice, in the second of the dialects, “I will speak. Which of you is Prince of the Earth?”

“We are his friends. We come to announce his arrival and to begin building a great village.”

“We were all drawn to this place, we do not know the reason. Do you?”

“The reason stands before you,” I replied, gesturing to my fellows. On the whole, they appeared to be a humble lot, somewhat unsure of our motives, understandably so. But something in this man sensed we were destined to meet. Our uncanny resemblance, and the ability to communicate in their language, assuaged much of his natural suspicion. I recall the details of this meeting as clearly as any memory I have, as if it happened only a day ago.

The man was perplexed but gathered his courage to ask simply, “But why?”

I thought it better to sit and talk with these people before explaining why and how they came to be there. “May we join you at your camp?” I asked.

The man looked to his comrades and sensed an affirmative consensus, then said in that ancient tongue, “You would be welcome.” With that he turned and led the way, a short distance to their campsite where fires were burning. All one hundred came forward cautiously but ever so curious about our one hundred. They all appeared to be young and healthy. Their resemblance to us was remarkable, that was a big factor in the successful outcome of this meeting, that and the ability to communicate.

The spokesman led us to a ring of rocks at the center of their camp where the biggest fire was. There we were introduced to one whom they had chosen as their leader, a sincere and fearless man he was, average sized, with black hair and eyes.

As we faced each other he said, “I am Amadon.”

“I am Van.” I then signaled that the offerings be brought up and put at Amadon’s feet. When the food and firewood had been placed, Amadon said nothing but appeared to approve. He then called out and one of their number came forward, a woman wise in appearance, reserved but unafraid in demeanor.

“This one foretold you would come,” said Amadon. “She advised everyone to wait and watch. She said there is a reason we all could do no other than follow our spirit leadings to this place. If you are the reason, then we welcome you. Let us sit and talk things over.”

The remainder of the day was spent socializing and learning the nuances of the dialect most of them understood in some measure. Our human aides relaxed as we came to know one another. To a person they were friendly, intelligent, and intensely curious about what brought them together in this place.

Right away, I felt a peculiarly strong affinity with Amadon. He and I exchanged many words, I learned much about his family and upbringing. He was an accomplished hunter and became the groups’ chief when he led a successful battle with a pack of wolves that attacked one of them who wandered from the fires during their first night at the site. My comrades had similar, but halting, conversations gathered around the humans’ fires. We did not divulge everything. In fact, not much except that we were destined to meet. The fact that our numbers and our genders matched perfectly alleviated what little doubt there was about the meeting’s inevitability.

None seemed surprised that the women of both groups overcame the initial sense of wariness easier than the men. Their natural sociability saw them quickly bonding in sisterly fashion and I knew this bode well for the integration of the whole team.

When the sun was low in the west, a full moon rose. The evening air was still and dry as they brought out their food reserves adding to ours. We gathered around fires toasting and tasting. They were accustomed to a mostly meat diet but willingly sampled the fruits, seeds, and nuts we brought. Conversing and feasting together on that beautiful evening served to seal our friendship with these simple but interesting humans with whom we would be closely associated for three thousand centuries.

No one slept that night. It was an extraordinary experience, this initial contact with a unique race that had emerged only a half million years previously from the Life Carrier formula, now primed for the light of truth. For them, a gripping uncertainty had been alleviated. It was a great relief for them knowing destiny had a hand in our meeting, that they were not misled or mad in following their inner urge to converge at this place.

All night we listened to stories of their trek to the site, some of their personal histories, but more important, we developed an unspoken mutual respect. I withheld the details of my origin telling Amadon I was from a land far away and a tribe unknown to him. They all were keen to know what had brought them together at this nameless place, how we knew their language but I diplomatically demurred. At that tender moment, it would have been easy to over-reveal and confuse. Better that they did most of the talking.

I recall Amadon asking many questions about the prince and wanting to meet him, but I sidestepped that issue as well. Since mortal eyes could not see him, an explanation would surely confound our new acquaintances. I deemed invisibility a topic not suitable for our first encounter.

When all factors are considered this first meeting with humanity went as well as we had hoped and prayed. Caligastia and Daligastia observed all, cheering us on unbeknownst to the humans. During a brief private conference away from the others, they congratulated me on our successful encounter and outlined their plan for our third day; acquiring more food, improving our shelters, working out a mutually agreeable plan to share security duty, and the ceremonial planting of what would grow to be the Tree of Life.

Daligastia returned to the group protecting the shrub from Edentia and reported our successful encounter. They remained at the cavern overnight then brought it to our camp early the next day, our third day on Earth.

***
Link to print and Kindle versions of The Planetary Prince & Van the Steadfast: https://www.amazon.com/gp/product/B0984YYTHP/

Links to all seven Urantia-based novels are on my website: https://www.amazon.com/Richard-E-Warren/e/B07SF8DC3C? 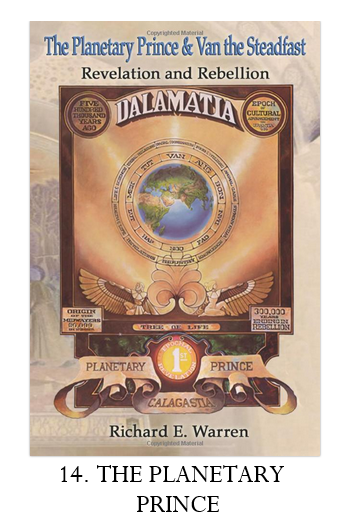 Re: The Caligastia 100 Meet Their 100 Human Associates

Van wrote:"It was tense for a moment, until I smiled."

Perfect pitch, and another beautiful melody.

Thanks Rick!
Post a reply
Switch to full style