Resurrection of Lazarus: A new painting

Resurrection of Lazarus: A new painting 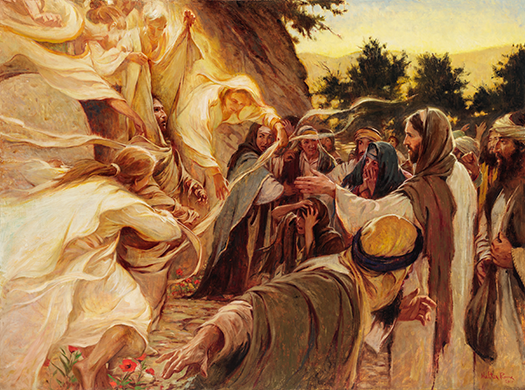 It’s a busy time for us at TruthBook, which helps explain why we have not been in touch with you for awhile. The whole team continues to work behind the scenes to improve the TruthBook experience and make this site one of the premier destinations for those searching for Jesus; and maybe most importantly, we have been hard at work developing a new book that will feature all of the new paintings in the Mo and Jen Siegel collection that we have been accumulating for nearly ten years! Details below…

Today we want to share another amazing work of art that has recently been completed: The Resurrection of Lazarus by Walter Rane.

Walter Rane created this beautiful and moving masterpiece of religious art. Some of you may be familiar with other works by this talented Mormon Christian artist and we are fortunate to add this commissioned piece to our collection. Walter’s motion filled, sensitive works of Jesus art have been the favorites of countless believers for many years. With The Resurrection of Lazarus, his talented interpretations of the Master’s life remain unparalleled.

Although most of the new paintings in the Mo and Jen Siegel Collection are depictions of unique Urantia Book stories and events, this painting is a rendering of a scene that has been painted many times and by many artists over the centuries. It is, of course, one of the major pivotal events in the Master’s life. Nevertheless, this beautiful work by Walter Rane IS unique because it closely depicts the resurrection events as described in The Urantia Book. While the Scriptural accounts devote one short chapter in the gospel of John (Chap 11) to this miracle, The Urantia Book devotes part of Paper 167 and the entirety of Paper 168 to this event.

Jesus was always deliberate in what he did and why he did it. This act was no different; it was planned and executed by Jesus for specific reasons. Jesus’ plan occurred to him soon after he received the news of Lazarus sickness; as was usual, he did not act rashly, but prayed that the heavenly Father might approve this last attempt of Jesus to appeal to the Jewish authorities to accept him and his teachings:

167:4.2 Jesus was very fond of Martha, Mary, and their brother, Lazarus; he loved them with a fervent affection. His first and human thought was to go to their assistance at once, but another idea came into his combined mind. He had almost given up hope that the Jewish leaders at Jerusalem would ever accept the kingdom, but he still loved his people, and there now occurred to him a plan whereby the scribes and Pharisees of Jerusalem might have one more chance to accept his teachings; and he decided, his Father willing, to make this last appeal to Jerusalem the most profound and stupendous outward working of his entire earth career. The Jews clung to the idea of a wonder-working deliverer. And though he refused to stoop to the performance of material wonders or to the enactment of temporal exhibitions of political power, he did now ask the Father’s consent for the manifestation of his hitherto unexhibited power over life and death.

The miraculous raising of Lazarus from the sleep of death clearly underscores Jesus’ statement: “I am the resurrection and the life.” After this demonstration of his power over life and death, there can be no further doubt of the truth of this statement. To underscore the reality of his power Jesus purposefully delayed his arrival at the home of Mary and Martha, so that by the time he got there, Lazarus had already been dead for four days … a significant detail, as explained in this passage:

167:4.3 The Jews were in the habit of burying their dead on the day of their demise; this was a necessary practice in such a warm climate. It often happened that they put in the tomb one who was merely comatose, so that on the second or even the third day, such a one would come forth from the tomb. But it was the belief of the Jews that, while the spirit or soul might linger near the body for two or three days, it never tarried after the third day; that decay was well advanced by the fourth day, and that no one ever returned from the tomb after the lapse of such a period. And it was for these reasons that Jesus tarried yet two full days in Philadelphia before he made ready to start for Bethany.

Unlike many traditional paintings of this amazing event, this interpretation by Walter Rane is colorful and full of life and activity. On the right, we see Jesus and other witnesses in ordinary daylight who are present at the tomb. You can see them react in varying ways to the celestial light of the scene at the left as Lazarus emerges from the tomb – a brilliant, vivid scene surrounded by the activity of angelic presence, as described in The Urantia Book.

“As this company of some forty-five mortals stood before the tomb, they could dimly see the form of Lazarus, wrapped in linen bandages, resting on the right lower niche of the burial cave. While these earth creatures stood there in almost breathless silence, a vast host of celestial beings had swung into their places preparatory to answering the signal for action when it should be given by Gabriel, their commander.

“Jesus lifted up his eyes and said: ‘Father, I am thankful that you heard and granted my request. I know that you always hear me, but because of those who stand here with me, I thus speak with you, that they may believe that you have sent me into the world, and that they may know that you are working with me in that which we are about to do.’ And when he had prayed, he cried with a loud voice, ‘Lazarus, come forth!’

Detail of Resurrection of Lazarus by Walter Rane

“Though these human observers remained motionless, the vast celestial host was all astir in unified action in obedience to the Creator’s word. In just twelve seconds of earth time the hitherto lifeless form of Lazarus began to move and presently sat up on the edge of the stone shelf whereon it had rested. His body was bound about with grave cloths, and his face was covered with a napkin. And as he stood up before them—alive—Jesus said, ‘Loose him and let him go.’

“As Lazarus came out of the tomb, the Personalized Adjuster of Jesus, now chief of his kind in this local universe, gave command to the former Adjuster of Lazarus, now in waiting, to resume abode in the mind and soul of the resurrected man.”

Read the entire account of the Resurrection of Lazarus from Paper 168.

This amazing act of resurrecting a man who had been dead four days thrills the believer even today. Together with Jesus own resurrection from the tomb on Easter morning, this demonstration of his power over life and death is the believer’s assurance that we have nothing to fear from death; we know of a certainty that our immortal souls are secure and safe in the Master’s safekeeping.

This is one of two new paintings that we want to share with you; and there are 8 more in progress. This flurry of artistic activity is very exciting for all of us and foreshadows progress of a new book that has been in the planning for many years. This new book will feature 90 painting that depicts many of the great Jesus moments from The Urantia Book. At this point, 24 artists will be painting in the book and the text is from the exquisite biography found in the Urantia Revelation and New Testament. It is scheduled for publication in late 2018 or early 2019. View the collection of new art works here.

Please continue to visit us at http://www.Truthbook.com And visit us at our Facebook page, too. It is our fond wish to make your visit enjoyable and inspiring, every time. We will be sharing more paintings with you as they are completed, and we hope you’ll want to share all of the wonderful images in our gallery with your friends and family, too.

Re: Resurrection of Lazarus: A new painting

Thank you for sharing this beautiful picture! I've always enjoyed visiting galleries and going to museums. A year ago, my sister fulfilled my dream and gave me a trip to the Vatican, where I could enjoy religious sculptures and paintings. Everyone should visit the Vatican and Italy at least once. Even tourists can see the works of the greatest artists like Michelangelo and Santi. I wanted to capture every moment on my camera or camera. I hope the future generation will also honor the legacy of the past and preserve it. Sometimes we do not understand what a treasure we possess.
Post a reply
Switch to full style